‘Along The Road’ CD

Along the Road is a five song studio EP, his first studio effort since … well … an earlier century. It was produced by Matt “All Day” Ascione, of the United States Air Force band Max Impact, and engineered and recorded at Bias Studio in Virginia with the great Bob Dawson, producer of Mary Chapin Carpenter’s triple platinum album “Come On Come On” as well as Dave Matthews “Recently” and “Remember Two Things.”

Pick up the CD from one of our shows, from CD Baby, or from us directly at a show. You can also listen on our web player on this site.

Get The CD Direct 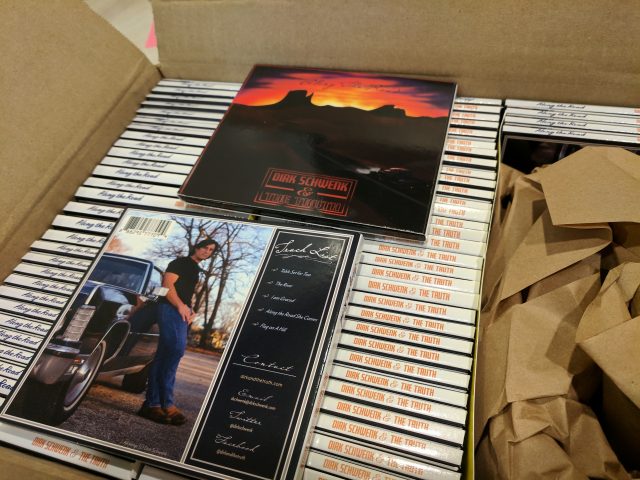 Reviews of ‘Along The Road’

Award winning folk rock, Americana singer/songwriter Dirk Schwenk (along with his band, The Truth) has delivered his latest album Along The Road.

Along The Road is packed with five tracks. Each worthy of radio airplay and playlist placements. I really mean that. These songs will immediately grab you and will refuse to let go until the very end.

Along The Road is guaranteed to pack a sonic punch that will have you coming back again and again for another listen. Dirk knows how to write songs that hit you hard and stick with you long after they’ve ended. If he hasn’t infected radio yet, I trust it will happen soon.

The first song sets the story for this album. It’s easy listening, rock, and country all mixed together. My favorite song from the Along the Road is “The River”. This a nice song, you feel the country music vibe flowing from this song with the banjo playing throughout. This song will have you wanting to hang out, fish, or relax by the riverside (or other body of water).

The cover of Dirk Schwenk’s Along The Road depicts a single pickup truck driving down a solitary stretch desert road at sunset. The sun is burning out over the mountains in the distance, turning the sky a mixture of pink and orange. It’s a pretty sight, but once the listener clicks play on Along The Road, they’re soon going to realize how perfectly that image captures the experience of listening to the album.